Please click here to find out more about the organisations and people involved in the Palaeodeserts Project.

This research has been generously funded by the European Research Council, the Saudi Commission for Tourism and National Heritage and the Max Planck Society.

Please click here to find out more about media coverage of the Palaeodeserts Project.

When did humans begin to herd animals in Saudi Arabia and how did these herders respond to the onset of aridification in the middle Holocene? The Palaeodeserts Project is taking a multidisciplinary approach, in which data from the excavation of settlement and burial sites, rock art, palaeoenvironmental and –climate archives, and climate modeling are used to close a substantial gap in our current knowledge of the prehistory of the Arabian Peninsula.

In the Jubbah Oasis, in the southern part of the Nefud desert of northern Arabia, the Palaeodeserts project identified the first Pre-Pottery Neolithic (PPN) lithic assemblage outside the Levant, as well as an occupation site with lithic artefact types similar to Epipalaeolithic industries in the Levant. Associated with both sites are palaeolakes that attest humid conditions during the early Holocene. Moreover, palaeoenvironmental reconstructions based on molluscs and ostracods confirm the presence of a shallow freshwater lake surrounded by moist and well vegetated environments. Climate modeling suggests that during the Holocene humid phase northern Arabia was on the northern extent of the African Summer Monsoon rainfall regime. This increase in moisture and vegetation is also reflected in the rock art of the region. An analysis of the animal species depicted in the rock art of Shuwaymis showed the simultaneous presence of lion, leopard and cheetah, which suggests a mosaic of habitats with thicker vegetation along the water courses of the wadis that supported a substantial prey biomass. 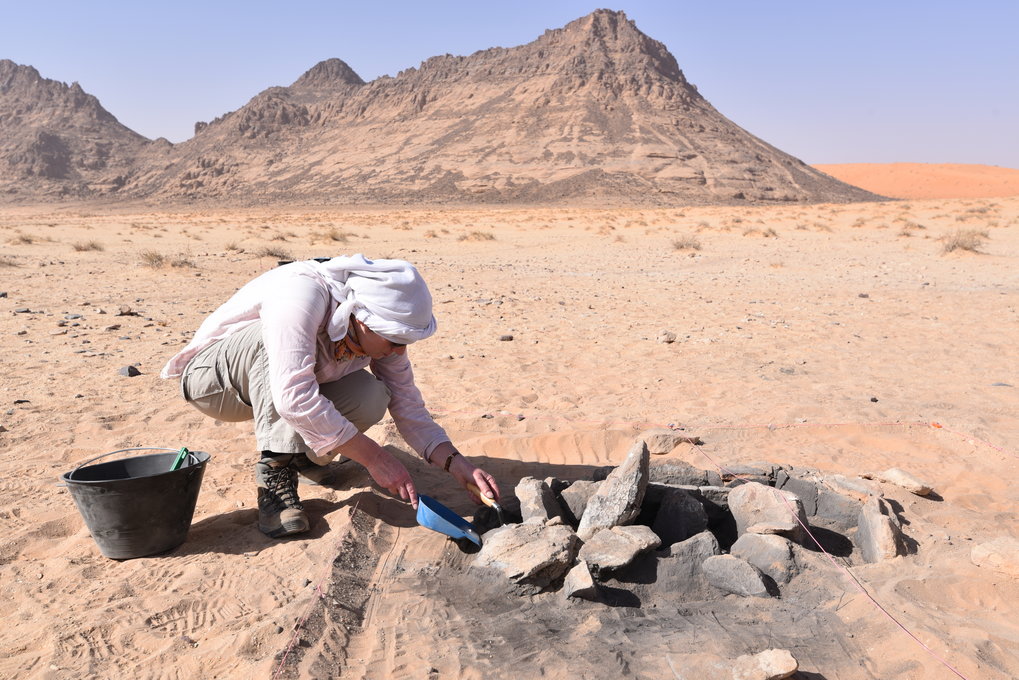 Nevertheless, the Neolithic of the Arabian Peninsula remains poorly known. Sites containing faunal remains of early domesticates are extremely rare and only few have been excavated in Yemen and a long the eastern coast of the Peninsula. Neolithisation models have therefore had to infer population dynamics and subsistence changes across vast distances and assume a migration of Levantine herders into Saudi Arabia to exploit pastures during the peak of the Holocene humid phase.

Similarly, archaeological contexts in UAE and Oman indicate a widespread abandonment of sites during a period of aridification at the end of the Neolithic period. During this ‘dark millennium’ herders are thought to have retreated to coastal areas. Areas in the interior of the Arabian Peninsula were re-settled during the Bronze Age, after 3000 BC. However, how populations in central, northern and western Saudi Arabia may have responded to a progressively arid environment remains unknown. There is wide evidence of perennial freshwater environments during the Early Holocene from e.g. Jubbah, Mundafan or Tayma. However, the exact timing of dry periods and magnitude of climatic and environmental changes as well as their regional differences remain, so far, poorly constrained. It is also not known whether large (palaeo)lakes in the interior of Saudi Arabia may have been refugia during such periods. The Palaeodeserts project uses a wide range of archaeological and scientific methods to investigate the Holocene humid period, and the subsequent onset of aridity, and the effect these changes had on vegetation and palaeolakes, as well as human and animal populations. This includes the dating of archaeological sites and palaeolake deposits; and analysis of materials recovered in excavations, such as faunal remains, lithics and ceramics to determine to what extent the Neolithisation of Arabia was driven by indigenous developments or incoming populations from the Levant. The investigation of continuous palaeoenvironmental archives, such as palaeolake sediment cores will be used to gain a comprehensive understanding of past climatic conditions. Robust age information of these archives will enable a direct link between archaeological findings and their environmental context. In combination with the archaeological record, continuous sediment records will allow addressing the timing, duration and abruptness of past dry periods and their impact on the Neolithic population. Phytolith analysis will be used to identify if domesticated plants were used in Arabia; and stable isotope and DNA sampling of Holocene populations will play an important role in the identification of population dynamics and mobility patterns. In addition, the archaeological record will be integrated with the rock art of the area, with a particular focus on cultural markers visible in hunter-gatherer, herder and Bronze Age imagery. Moreover, the depicted animal species can be linked with climate modeling to determine how rainfall patterns may have impacted on the direction and scale of human and animal migration patterns.