Both stations are in walking distance to the Max Planck Institute for the Science of Human History (about 15 minutes).

From the station Jena-Paradies: Leave the station, cross the street and turn left. Follow the street straight ahead, pass by a roundabout and continue at Kahlaische Straße. After the traffic light (Felsenkellerstraße) pass on to the next intersection (Sandweg) and take the steep driveway on the right to the Max Planck Institute.

Arrival at Berlin-Schönefeld (SXF) or Berlin-Tegel (TXL): Take an S-Bahn (commuter rail) or bus (line TXL) to Berlin Hauptbahnhof (Berlin Main station) or Berlin-Südkreuz (ride time about 30 minutes).  From both stations there is almost hourly service to Jena (ride time about 2:20 hours.) Please pay attention: A few trains don’t stop in Berlin-Südkreuz.
Arrival at Frankfurt (FRA): There is a major train station at the airport with almost hourly service to Weimar or Erfurt, where you can easily connect to Jena. Travel time is about 3:30 hours.
Arrival at Munich Airport (MUC): Take a shuttle or any train to Munich’s main station (München Hauptbahnhof). There you can take the Intercity train to Jena Paradies station. Sometimes you’ll have to change in Nürnberg. Travel time is about 5 hours.
Leipzig/Halle (LEJ): A regional airport, you can get flights on several major international carriers currently representing two of the major airline alliances, as well as a host of low cost carriers. A train station is located directly at the airport, and it takes about 90 minutes to get to Jena.
Frankfurt Hahn (HHN): This airport is a major center for low cost carriers with destinations across Europe. Be warned that it is about two hours west of the city of Frankfurt meaning that it will take at least five hours to get to Jena, if not longer. You’ll need to take a bus to Frankfurt and then a train to Jena.

To get to the institute, please follow the directions above.

Jena is located at Autobahn A4 from Frankfurt/Main to Dresden in close proximity to the A4/A9 highway intersection Hermsdorfer Kreuz. Leave the Autobahn A4 at the exit "Jena-Göschwitz" (#53). Turn left to Jena-Stadtmitte (downtown) and go straight ahead for about 5 kilometers until you see the green steam pipes crossing the street. Turn left into Sandweg immediately after the steam pipe bridge. (When you reach the roundabout you have gone too far and need to go back to "Sandweg".)

Parking: You can park your car at the parking lot which you will find at the right, once you have turned into the street Sandweg.

Travel directions MPI for the Science of Human History [PDF] 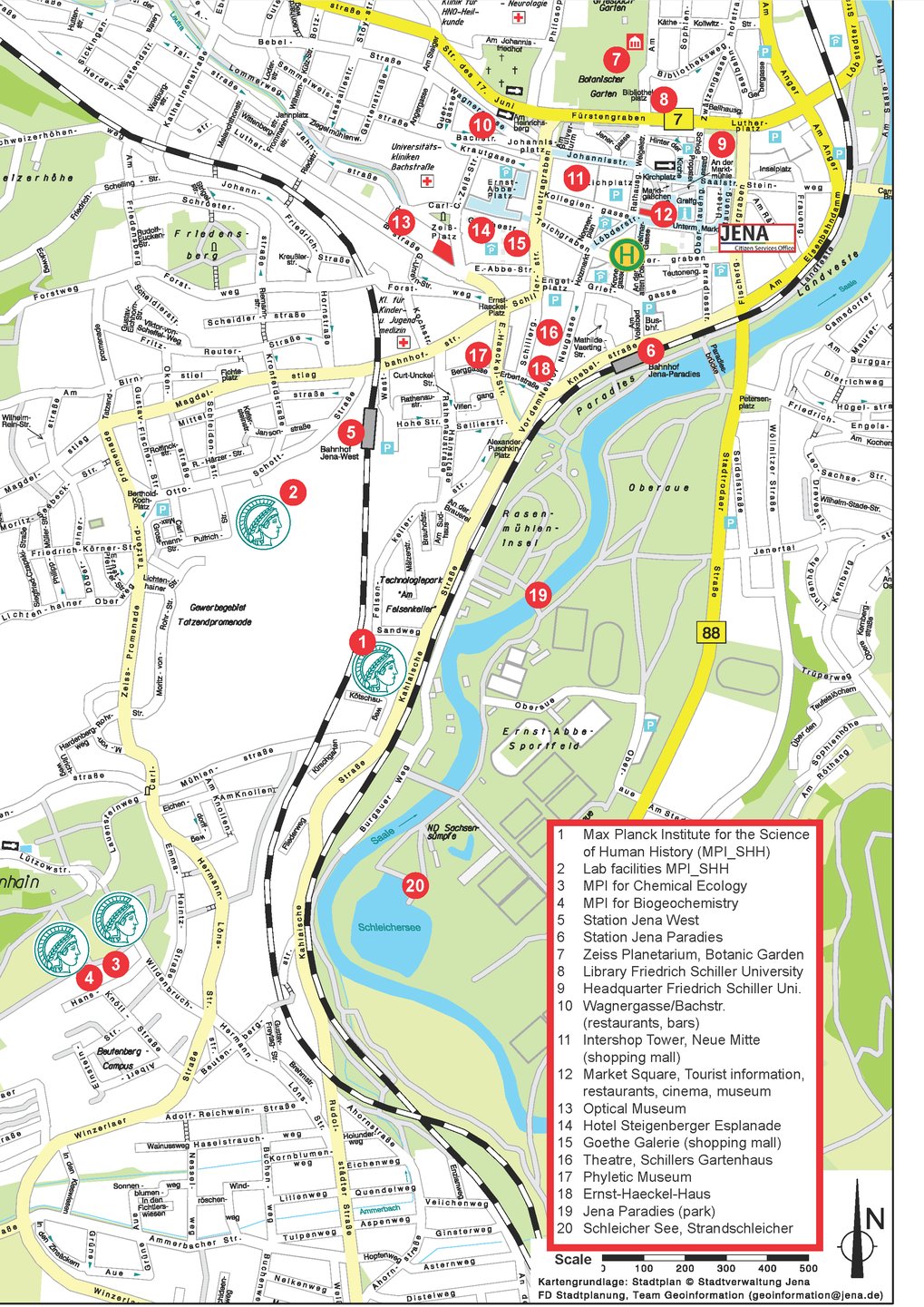